Hiperboreea (ISSN 2688-8211; E-ISSN 2284-5666) is the official journal of the Balkan History Association. It publishes articles in the field of History, written in English and occasionally French, book reviews, and evaluations of scholarly conferences. Our focus is the study of Southeastern Europe, broadly defined as the states situated in the Balkan region.

Since its first publication in 2012, Hiperboreea has had a monthly periodicity from January 2012 to March 2013, a quarterly publication until the end of 2013, and, starting 2014, a biannual appearance. According to the ranking system of the National Council of Scientific Research (CNCS) in Romania, the journal is included in category B (Humanities, History and Cultural Studies). The Editorial Board invite submissions from senior scholars and junior researchers who have obtained the doctoral degree. PhD students may also submit articles as co-authors with their supervisors or other senior researchers.

Starting from 2020, Hiperboreea is published by the Penn State University Press. The editors will inform authors of the decision on their manuscripts within a few weeks from submission. All articles submitted to our journal are reviewed following a double blind peer-review, which means that the reviewer’s and author’s identities are concealed from each other throughout the review process. Our policy requires at least two reviewers per issue, although it is customary that many more reviewers cooperate on individual articles. Members of the Balkan History Association will receive printed and electronic copies by virtue of their membership.

Hiperboreea is one of the few Romanian journals that have built a solid presence in the online environment, being indexed in the following international databases and libraries: 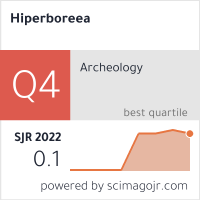